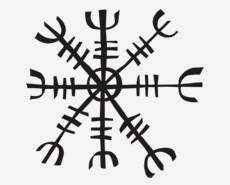 On the way to Strandagaldur, the Museum of Icelandic Sorcery and Witchcraft, I had a panic attack. Getting to our B&B at Kirkjubóll was grueling: in and out of deep fjords, sometimes a paved road, sometimes gravel, sometimes two lanes, sometimes one, wind buffeting our tiny rental car, sun glare, traffic passing, pushing, campers and cars, and a sheer, sheer drop off to the sea far below, without even a white line to mark the edge of the road. It was tiring and took concentration to keep an eye on the road and not be distracted by the striking landscape or be pulled off into the void by that sheer, unmarked edge.

Did I mention I'm afraid of heights?

At a headland I pulled over between two campers (whose drivers were peeing over the edge) and my traveling companion, Jenny, pulled out her handy bottle of Rescue Remedy, a mix of herbs and vodka. Two drops on my tongue did the trick. My hands came uncramped from the wheel. I began to breath again.

Jenny is an herbalist. In Iceland when I introduced her, my friends would nod and whisper among themselves. Suddenly their faces lit up in a smile. "Oh, she's a witch!" And she did cure a little girl of the night terrors by giving her a potion and a posey to put under her pillow. Truly.

Jenny's also a photographer, trained to see things differently. A perfect person to take to the Westfjords to see the witchcraft museum, someone's brilliant idea to lure tourists to an incredibly bleak part of Iceland with hair-raising roads. 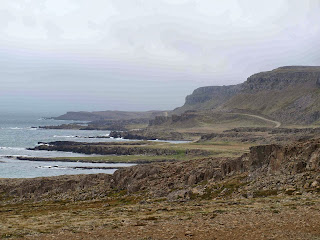 When we reached our night's lodging, Jenny made herb tea from some leaves she picked behind the house. We took a stroll on an arc of black beach into the teeth of the wind, the late evening sun behind a mountain--this was June--bundled up in sweaters and scarves and ear-warmers (we could have used long underwear), singing, and picking up mussel shells, orange scallops, broken conchs, driftwood, feathers, sea urchins, while the arctic terns and oystercatchers and razorbills strafed us, shrieking. Suddenly, I was ecstatic: waves and mountains with snow on them, bird cries, cold. It was magic.

The next morning we drove to the town of Hólmavík in misty low cloud, over a gravel road between banks of old snow--it really was June--and a few brave tussocks of flowering lamb's-grass and bilberry. We passed more black-sand bays littered with driftwood logs. Someone had pulled them from the tide and sorted them by size. Also ropes, nets, pallets, and flat building panels. We passed a road sign that said "I." Jenny decided it meant, not "Information," but "Isolation."

Hólmavík is a very small town, even for Iceland. There's a gas station, a bank, a health clinic, and Strandagaldur, the Museum of Icelandic Sorcery and Witchcraft, which itself is very small but beautifully designed by Árni Páll Johannsson, who also designs movie sets. The exhibits are evocative, the descriptions informative, with a good mix of "wow" displays and deep scholarly stuff (reproductions of manuscript pages, maps, timelines, genealogies).

The English audio-guide took about an hour and focused mostly on who the witches were and why they were singled out. Their stories were well-told: You could draw your own conclusions about their magic powers and were sympathetic to these 20 men and 1 woman who were burned at the stake in the late 1600s for being different. Many were the victims of one rich woman, the sheriff's wife, who accused someone of witchcraft every time she got sick. In another case, the priest was awarded "compensation" for any acts of witchcraft in his parish--meaning he got to confiscate all the witch's property. Quite an incentive to accuse a neighbor of working black magic. I bought the book Angurgapi: The Witch-hunts in Iceland by Magnús Rafnsson to learn more.

Then there's the magic itself, with lots of spells written in runes. I bought a booklet of Love Spells. Here's one: It says you are supposed to carve this design on a piece of bread and cheese and give it to your beloved to eat. A sure way to his or her heart.

Other spells will make your sheep docile or give them twin lambs, protect them from being drowned in floods or keep foxes away, make fish jump onto your hooks, keep a scythe sharp, and strengthen your rowing or wrestling or grass-mowing skill.

Still other spells will prevent theft, kill an enemy's horse, or just break its leg. To keep visitors away, according to another booklet published by the museum, carve this rune stave

on a piece of rowan wood when the sun is at its zenith. Walk three times around the house the way the sun turns and three times widdershins (the opposite way) holding the carved rowan stick in one hand and "sharp thorn grass" in the other. Then lay both of them on the gable above your house door.

The rune stave at the head of this blog post, the Helm of Awe or Ægishjálmur, used as the museum's logo, induces fear and protects you against abuses of power--if you carve it in lead and press it on your forehead.

The grisliest (and most popular) magic item on view at the museum was the pair of corpse-skin trousers or "necropants" that promise to make you rich. You can see a video about them here on their website [click here].

Here's how to make them, according to the website--be sure to get permission first!

If  you want to make your own necropants (literally, nábrók), you have to get permission from a living man to use his skin after his death. After he has been buried, you must dig up his body and flay the skin of the corpse in one piece from the waist down. As soon as you step into the pants, they will stick to your own skin. A coin must be stolen from a poor widow and placed in the scrotum along with this magical sign

written on a piece of paper. Consequently the coin will draw money into the scrotum so it will never be empty, as long as the original coin is not removed.

If you want to go to heaven after you die, however, you have to be sure to pass your necropants on to someone else while you're alive (and still rather flexible): That person has to step into each leg of the skin as soon as you step out of it. The necropants can thus keep a family in riches for generations.

Note that, despite what you might have read elsewhere on the internet (such as at the International Business Times, here), the necropants in the museum are plastic fakes, not "dead human skin on display," as that headline claims. The article itself is clear: "just a replica, according to The Huffington Post." (The headline at HuffPo also screams: "Necropants, Made from Dead Man's Skin…" Told you this was the most popular exhibit.)

The Sorceror's Cottage was a good second act. "Let there be mist and mischief," said a witch from these parts in the most famous of the medieval Icelandic sagas, Njal's Saga. We drove about an hour farther to see the cottage, through mist, on rocky, bumpy, scary roads, and encountered more than enough mischief in the form of a strange knocking sound from beneath our car that sounded like we were dragging a body--but when we stopped to look nothing was there. Might have been a stone in the wheel-well. We hoped so, at least. 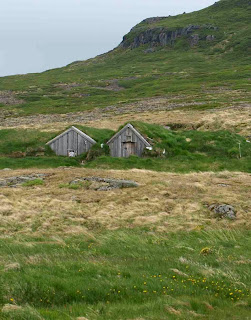 The Sorceror's Cottage is a very rough turf-house of the poorest sort, a low-ceilinged, dirty hovel with a pen for the sheep next to two beds for the people. Again, it was very realistically recreated, stocked with 17th-century tools and rough, hooded robes. The curator wisely told us to go through the house twice: look, read the text, then look again.

When there are more than two tourists, the curator puts on her witch's robe and acts the part. With us she simply shared the story of the three trolls who tried to separate the Westfjords from the rest of Iceland so they could escape the awful ringing of the church bells. She gave us directions to the rock stacks the trolls turned into when the sun rose and caught them at their work.

We went to find them and had a picnic beside one troll, a tall, black slab of columnar basalt laid up sideways like a stack of firewood, the size of a house but only about 6 feet thick. It stood on a grassy lawn between the swimming pool and some guest cottages at the hamlet of Drangsnes. On the way there we had passed the other two trolls, standing at the tip of a rocky headland with their feet in the sea.

Join me again next Wednesday at nancymariebrown.com for another adventure in Iceland or the medieval world.
Posted by Nancy Marie Brown at 9:43 AM
Email ThisBlogThis!Share to TwitterShare to FacebookShare to Pinterest
Labels: folktales, Iceland, medieval, Middle Ages, runes, trolls, Westfjords, witchcraft