Tomorrow the sexy Viking Ragnar Lothbrok returns to the TV screen in Season Two of the History Channel's series, "The Vikings." I hope he still has his fancy hairstyle.

At first it didn't say "Viking" to me. I wanted shaggy, "Thor"-style hair and a forked and braided beard. But as I've been rereading the historical texts from the Viking Age, as research for my next book The Ivory Vikings, I keep stumbling upon the sources the History Channel's writers must have used.

Ragnar Lothbrok's hairstyle seems to me to have been modeled on that of Sviatoslav, the prince of Kiev, whom the Byzantine historian Leo Diakonus met in about 950 on the banks of the Danube. As quoted by Robert Ferguson in The Vikings: A History (Viking Penguin, 2009):

"He manned the oars just as his followers did…. He was of medium height, neither too big nor too small. He had thick eyebrows, blue eyes, and a short nose. He was not bearded, but wore a long, drooping mustache."(Ragnar Lothbrok needs one of these.) "His head was shaven apart from a single lock of hair on one side of his head, this being a sign of his aristocratic status. His neck was thick, his shoulders broad, and all in all he looked quite magnificent. There was something wild and bleak about him."

That's the History Channel's Ragnar Lothbrok to a "T"--except for the mustache and the fact that Ragnar's single lock is down the back, not off to one side, and is braided, but those are minor points. He certainly is "wild and bleak" and "magnificent." 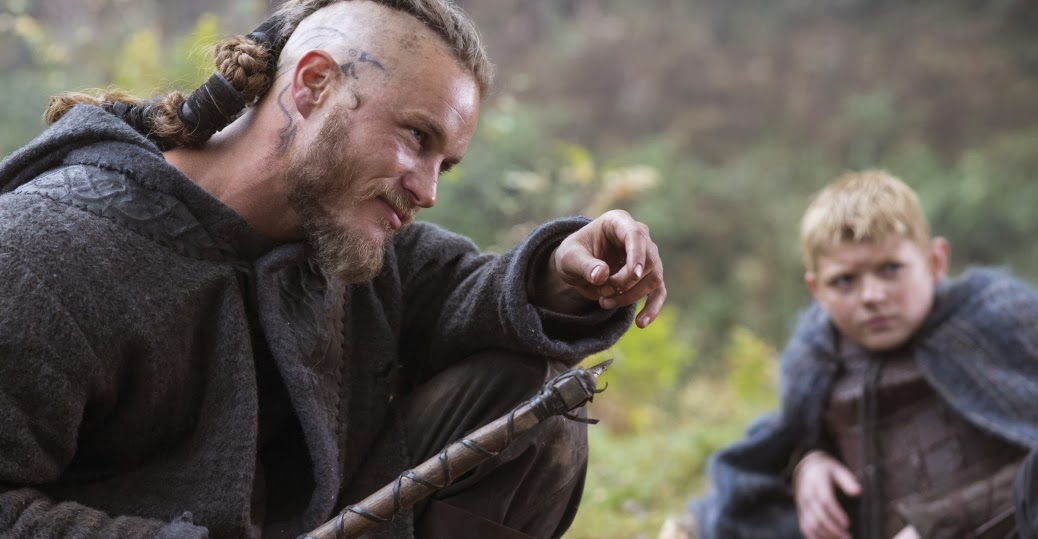 Leo Diakonis also says Sviatoslav wore a large earring in one ear: It was a gold hoop with three gems set into it, the middle one a red ruby. Perhaps Ragnar will acquire one on his next raid.

Other than this Byzantine description of a Viking on the "East Way" from Russia to Byzantium, we have few descriptions of Viking men's hairstyles. The 13th-century English chronicler John of Wallingford complained that Vikings were always combing their hair to look pretty to the women, and considering the number of combs archaeologists find in Viking settlements and graves, he was probably right. (Another reason to comb hair was to pick out the lice.)

A silk hairnet was found in Viking Dublin, but that probably belonged to a woman. Depictions on Viking artifacts show that both men and women favored long hair, according to the 1994 Cultural Atlas of the Viking World. Some men "wore theirs tightly rolled into a bun at the nape of the neck, others had their hair shaved, while the women sometimes arranged their long flowing locks in rather complicated styles knotted on the crown of the head."

There's a famous saga episode that centers around a man's "long flowing locks." As told by Snorri Sturluson in The Saga of Olaf Tryggvason (in Lee Hollander's translation), the famous Viking band that haunted the Baltic, the Jomsvikings, were defeated and captured. Thirty of them were forced to sit on a log, their feet tied to each other but their hands free. They are to be beheaded. Each Viking wants to die memorably.

"Then one of them said, 'Here I have a dagger in my hand, and I shall stick it in the ground if I am conscious when my head is chopped off.' He was beheaded, and the dagger dropped from his hand."

So much for experimental science in the Viking Age. 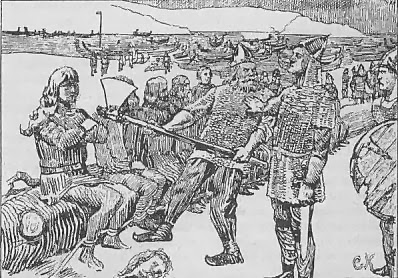 Snorri continues: "Next to him sat a handsome man with long and fine hair. He swept his hair forward over his head and stretched out his neck, saying, 'Don't sully my hair with blood.' A man took hold of his hair with a firm grip. Thorkel swung his axe, but the viking swiftly jerked his head back, so the man holding his hair was forced forward, and the axe fell on both hands, shearing them off so that the axe struck the ground.

"Then Earl Eirik came up and asked, 'Who is this handsome man?'
"'They call me Sigurth,' he said, 'and I am said to be the son of Bui. Not yet are all Jomsvikings dead.'

"Eirik said, 'You are truly likely to be the son of Bui. Would you have quarter?'

"'That depends on who offers it,' said Sigurth.

"'He offers,' said the earl, 'who has the authority to do so--Earl Eirik.'

"'Then I accept,' said he. Thereupon he was released from the rope."

Then there's the eye-makeup and the tattoos. All the Vikings in the History Channel's series seem to have tattoos, while some, like Floki and the seer are remarkable for their gobs of black eye-shadow. Both of these were singled out for attention by Arab travelers. 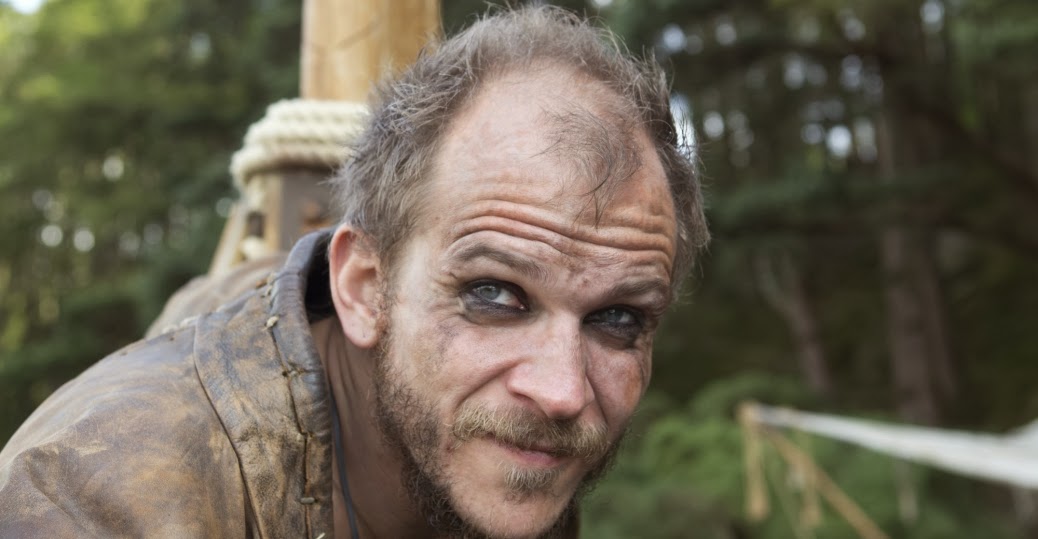 The Arabic sources on the Vikings are collected and translated in a handy volume by Paul Lunde and Caroline Stone, Ibn Fadlan and the Land of Darkness (Penguin, 2012). The 10th-century Arab traveler, Ahmad Ibn Fadlan, who described the Viking funeral I wrote about two weeks ago [2-12], is our only source for the idea that Vikings liked tattoos. He met a party of Viking (or "Rus") traders by the Volga River and wrote, "From the tips of his toes to his neck, each man is tattooed in dark green with designs and so forth."

The eye-makeup comes from a different source. In 965, Ibrahim Ibn Ya'qub traveled through northern Europe. He came to Schleswig--the Danish Hedeby--which he described as "a very large city on the coast of the ocean." It was "poor in grain and the climate was bad. The inhabitants mostly eat fish." Then he mentions the make-up: "Both men and women use a kind of indelible cosmetic to enhance the beauty of their eyes." That pretty much leaves it up to interpretation how much make-up they used and where they applied it.

Floki's big black eyes might or might not be accurate, but it's certainly effective. He might not be "wild and bleak" and "magnificent," but in many ways he's my favorite character. I've always loved a trickster.


Join me again next week at nancymariebrown.blogspot.com for another adventure in Iceland or the medieval world.