Even if Wagner's main sources were not ultimately German.

Who is Wotan? None other than the God of Wednesday, Odin. And if you've been reading this blog for any length of time, you'll know that the main source for stories of Odin is the 13th-century Icelandic writer Snorri Sturluson.

In a well-known letter from 1856, Wagner jotted down the names of ten books that inspired him to write The Ring.

Number three was Jacob Grimm’s German Mythology of 1835, which cites Snorri Sturluson's Edda, the Poetic Edda, Snorri's Heimskringla, and other Icelandic sagas. (In fact, if you take the Icelandic sources out of German Mythology, all that's left is an empty shell.)

Number four on Wagner's list was "Edda" (like most people at the time, he didn't discriminate between Snorri's Edda and the Poetic Edda).

Number five was the Icelandic Volsunga Saga, which Snorri did not write, but which was written in Iceland at roughly the same time Snorri was active. (Some scholars say it is earlier than Snorri's sagas, some say later.)

Number ten on Wagner's list was Heimskringla, Snorri's collection of sixteen sagas about the kings of Norway.

Wagner made this list just after completing Das Rheingold and Die Walküre; he wouldn’t finish Siegfried until 1871 and Götterdämmerung until 1874. The first full performance of the four-opera cycle was in 1876.
It was twenty-five years in the making. The idea for a cycle of operas based on Siegfried—or Sigurd—the Dragon-slayer and the accursed gold ring of the dwarves came to Wagner in 1851. A German translation of the Poetic Edda and some tales from Snorri’s Edda, he wrote, “drew me irresistibly to the Nordic sources of these myths,” the most expansive being the Icelandic Volsunga Saga.

Wagner had, three years before, written a libretto called Siegfried's Death based on the medieval German Nibelungenlied, or "Song of the Nibelungs." This libretto, according to Edward Haymes in his book Wagner's Ring in 1848, is quite similar to Götterdämmerung; "in fact," Haymes told me, "some of the scenes are taken over verbatim."

But Wagner wasn't satisfied. Only after he had discovered what he called "the Nordic sources," Wagner said, "did I recognise the possibility of making him [Siegfried] the hero of a drama; a possibility that had not occurred to me while I only knew him from the medieval Nibelungenlied."

The German "Song of the Nibelungs" was written at about the same time as Snorri was writing his Edda in Icelandic (c. 1220-1241). Some of the same characters appear: Sigurd the Dragon-Slayer (Wagner's Siegfried), Brynhild (Brünnhilde), Gudrun (Gutrune). But half of the "Song" takes place after their deaths; it has no counterpart in Wagner's Ring.

And much that Wagner loved about the Sigurd story exists only in the Icelandic sources: the dragon, the ring, the valkyries, the sibyl; the characters of Odin and the other gods, the giants, the dwarfs, Idunn’s apples, the rainbow bridge, the magical helmet, Valhalla, the Twilight of the Gods. 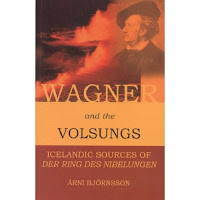 In his 2003 book, Wagner and the Volsungs: Icelandic Sources of Der Ring des Nibelungen (which is online here: http://www.vsnrweb-publications.org.uk/Wagner.pdf), Icelandic scholar Arni Björnsson concludes that 80 percent of Wagner’s motifs are Icelandic. Five percent are German. Most of the remaining 15 percent are shared, appearing in both the Icelandic and German sources, though some—like the Rhine Maidens—are Wagner’s own invention, for he was nothing if not creative.

Like Snorri, Wagner took bits and pieces of myth and made of them something magical.

Join me again next Wednesday at nancymariebrown.blogspot.com for another adventure in Iceland or the medieval world. And don't forget to enter the raffle for a free, autographed copy of Song of the Vikings. For details, click here.