Did you see episode 1 of "The Vikings" on the History Channel last Sunday? If I had a TV I would have watched it--I've been besotted with Vikings since at least 1984, when I stood in awe of the Gokstad ship (at left). But what I read in the February 24 New York Times about the TV program made me wonder, How much of the History Channel's "Vikings" will be true to history?

"For the elaborate History project," wrote the Times reporter, script-writer Michael Hirst "immersed himself in what had been written about Viking culture--basically documentation by outside observers since theirs was an illiterate society. He found the material limited and biased. 'They're always the guys who break in through the door, slash up your house and rape and pillage for no good reason, except that they enjoy the violence,' he said. 'I wanted to tell the story from the Vikings' point of view, because their history was written by Christian monks, basically, whose job it was to exaggerate their violence.'"

Continued the Times reporter, "Despite History's mantle of preserving and purveying an accurate picture of the past, hewing to the letter of historical accuracy wasn't possible in the case of a dramatic series based on fragmented documentation, hence a large degree of dramatic license was employed. 'I especially had to take liberties with "Vikings" because no one knows for sure what happened in the Dark Ages,' Mr. Hirst said. 'Very little was written then.'"

Sigh. What Hirst said is literally true: "Very little was written then," and all of it by the Vikings' enemies. Nothing that I know of was written down in Scandinavia during the Viking Age, roughly 793 to 1066. As I argue in Song of the Vikings, the sagas that have done the most to establish our current image of the Vikings were written in the early 1200s by the Icelandic chieftain Snorri Sturluson: Egil's Saga and the kings' sagas in Heimskringla.

I argue, as well, that Snorri was a creative artist, not what we'd think of as a historian. He made things up. Most modern readers recognize that when the great Viking warrior Egil Skallagrimsson says, "I'll give it a try, if you like, but I never expected to make a praise-song for King Eirik," the quote was made up. Egil died nearly 200 years before Snorri was born. No one in York, England in 948 had a voice recorder. There was no one taking dictation. Egil didn't write any letters home.

And yet, Egil (at left) did make that praise-song. It was memorized and passed down through the generations, only becoming "written" when it appeared in a manuscript of Egil's Saga. The same is true of Egil's response, when the king accepted the poem as a suitable apology for Egil's crimes and rewarded him with the gift of his own ugly head:

Ugly as I, Egil, am
I'm not in the way
Of refusing from a ruler
My rock-helm of a head:
Was there ever an enemy
Won such an elegant
Gift from a great-hearted
Gallant like Eirik?

"Very little was written then" in the Viking Age, but much was composed. As I've mentioned here before [link], we know the names of dozens of Viking poets, or skalds. We can read (or, at least, experts can) hundreds of their verses. What skalds thought important enough to put into words provides most of what we know today about the inner lives of people in the Viking age, what they loved, what they despised.

Snorri Sturluson depended on the words of the skalds to write his sagas. Few poems had been written down before his lifetime, so Snorri learned them the way skalds had for hundreds of years, by ear. He loved poetry and memorized a great deal of it. Egil's Saga contains three major poems, like "Head Ransom," and many minor ones. Heimskringla, Snorri's history of the kings of Norway, includes nearly 600 poems. In his Edda, which is about the art of poetry, Snorri quotes 373 verses by more than 60 poets--nor is that all the poetry Snorri knew: in the Edda, he quotes only single lines or half-stanzas, not whole poems.

Snorri himself discussed the relationship between poetry and history in the beginning of Heimskringla. Poems are more trustworthy than prose, he argued, if “correctly composed and judiciously interpreted.” The intricate rules of skaldic poems make them easy to memorize--change a word and the poem simply won’t work. (The rules also make skaldic poems impossible to translate well.) As Snorri wrote, “The words which stand in verse are the same as they were originally, if the verse is composed correctly, even though they have passed from man to man.” For this reason they were considered trustworthy historical sources even if hundreds of years old. 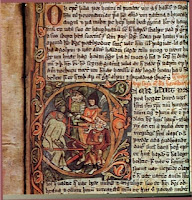 Often the poets were eyewitnesses to events. King Harald Fairhair, who united Norway and prompted the settlement of Iceland in the late 800s, for example, kept several poets at court. More than 300 years later, Snorri noted, “Men still remember their poems and the poems about all the kings who have since his time ruled in Norway.”

King Olaf the Saint (in the illumination at left) made sure the three poets in his retinue were safe behind the shield wall at his last battle in 1030, so they could record his courageous death-scene for posterity. (In spite of his efforts, all three died; the poet who composed Olaf's elegy was in Rome when the battle was fought.)

To write his kings’ sagas, Snorri said, he sought out poems that were recited before the kings themselves or their sons, even though he was well aware that court poetry was propaganda. Poets always “give highest praise to those princes in whose presence they are,” Snorri admitted. “But no one would have dared to tell them to their faces,” he argued, “about deeds which all who listened, as well as the prince himself, knew were only falsehoods and fabrications.” That, he said, would be mockery, not praise.

With a budget "reported at $40 million" for the History Channel series, you'd think Michael Hirst might have stumbled upon the works of Snorri Sturluson and, through him, the poetry of the Viking skalds. It's not "documentation." But through skaldic poems, we can still hear the voice of the Vikings. We can get inside their heads and shed a little light on those Dark Ages. We don't have to make it all up.

Join me again next Wednesday at nancymariebrown.blogspot.com for another adventure in Iceland or the medieval world. And don't forget to enter the raffle for a free, autographed copy of Song of the Vikings. Details are in last week's post or click here.