Iceland and the Vikings 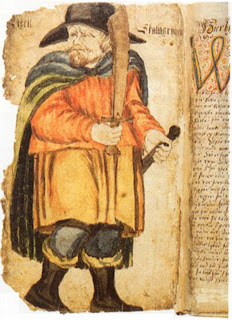 Each year I lead a week-long tour to West Iceland called "Sagas & Vikings." So I took it personally when an article on Iceland Monitor, the English language website of Iceland's newspaper Morgunblaðið, called it "exaggerated or distorted" to speak about Vikings in Iceland.

I disagree. Iceland, to me, is the best place in the world to learn about Vikings. I've been going there for the past 30 years for that very purpose.

What does "Viking" mean? "Raider" or "plunderer" are medieval synonyms for Viking; some translators use the term "pirate," which tends to make my head spin. (Think Captain Hook, eye-patch, aargh.)

But I use "Viking," like many other modern scholars, to describe any Norse-speaker during the Viking Age, which is traditionally dated from 783 to 1066.

And raiding was not the sole defining characteristic of the age: Exploration was just as significant.

I feel quite justified, for instance, in calling my book about the Norse explorations of North America The Far Traveler: Voyages of a Viking Woman. In fact, one of my goals in that book was to redefine the word "Viking" to include the role of women. 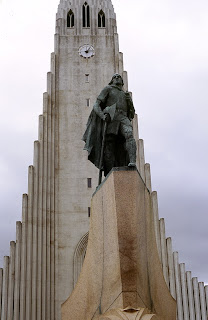 Few people have trouble imagining Leif Eiriksson, who discovered America in around the year 1000, as a Viking. Every representation of him that I have ever seen includes a spear or large axe--like this one in front of Hallgrimskirkja in Reykjavik. But why does Leif get all the credit? After his first sight of the New World, he never went back Gudrid, Leif's sister-in-law, was the real explorer. She tried to settle there twice, with two different husbands. If you want to learn about Viking explorers, put Gudrid the Far-Traveler at the top of your list.

Gudrid's voyages appear in two of the medieval Icelandic sagas, written a hundred or more years after her death. The article in Iceland Monitor suggests the importance of the Icelandic sagas is "exaggerated or distorted" too, and again, I disagree. As I point out in Ivory Vikings, more medieval literature exists in Icelandic than in any other European language except Latin.

If you want to learn about Vikings and the Viking Age, medieval Icelandic literature is your best--and often your only--source. Without the works of Snorri Sturluson alone, as I wrote in Song of the Vikings, we would know next to nothing about Viking Age culture.

Because of Snorri’s Edda, tiny Iceland has had an enormous impact on our modern world. All the stories we know of the Vikings’ pagan religion, the Norse myths of Valhalla and the valkyries, of one-eyed Odin and the well of wisdom, of red-bearded Thor and his hammer of might, of two-faced Loki and the death of beautiful Baldur, of lovesick Freyr and lovely Freyja, the rainbow bridge, the great ash tree Yggdrasil, the world-wrapping Midgard Serpent, Heimdall’s horn, the eight-legged horse Sleipnir, Ragnarok or the Twilight of the Gods…

All the stories we know of the gods whom we still honor with the names Tuesday, Wednesday, Thursday, and Friday—for all of these stories Snorri is our main, and sometimes our only, source. 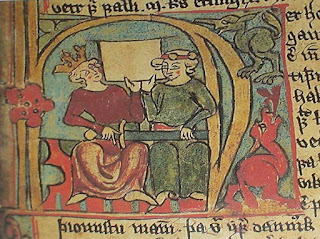 Snorri wrote his Edda originally to teach the young King Hakon (here on the left) the ins and outs of Viking poetry. For the Vikings were not only fierce warriors, they were very subtle artists. Because of the work of Snorri and his followers, we know the names of over 200 Viking skálds. We can read hundreds of their verses: In the standard edition, they fill 1,000 two-column pages. What skalds thought important enough to put into words provides most of what we know today about the inner lives of people in the Viking Age.

We also know the history of Scandinavia in the Viking Age almost entirely through Snorri. His second book, Heimskringla, is a set of sixteen sagas about Norse kings and earls, both pagan and Christian, from the ancient days of Odin the Wizard-King through King Magnus, who was deposed in 1177, the year before Snorri’s birth. Through his vivid portraits of kings and sea-kings, raiders and traders in these sagas, Snorri created the Viking image so prevalent today.

In his third book, Egil’s Saga, Snorri expanded the archetype, creating the two competing heroic types who would give Norse culture its lasting appeal. The perfect Viking is tall, blond, and blue-eyed, a stellar athlete, a courageous fighter, an independent, honorable man who laughs in the face of danger, dying with a poem or quip on his lips. He is like Egil’s brother and uncle in this saga. Or he is like Egil, his father, and his grandfather: dark and ugly, a werewolf, a wizard, a poet, a crafty schemer who knows every promise is contingent—in fact, somewhat like Snorri himself, as he is portrayed in a saga written by his nephew. 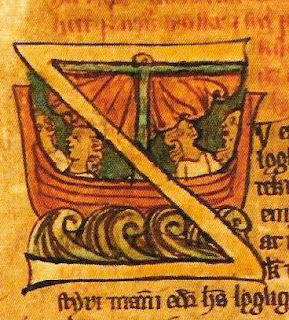 On my "Sagas & Vikings" tour, we visit many of the places Snorri lived and wrote about, as well as the site of Gudrid's birth. We discuss the two competing stories of Iceland's settlement by Vikings--explorers and raiders both--and learn how they negotiated a society with no king. We see saga manuscripts and archaeological sites and talk about what that word "Viking" really means in the landscape that inspired our best--and often only--descriptions of Viking life. I hope you'll join me.

For more information on this year's "Sagas & Vikings" tour, see Hestaland.net. The tour is limited to 12 people. Horseback riding is optional.