Looking for Walrus in Iceland's Westfjords

The last time I drove through Iceland's mountainous West Fjords, I had a friend with me, an herbalist whom my Icelandic hosts gleefully referred to as my personal witch, and she'd brought a bottle of Rescue Remedy.

The roads were narrow and precipitous, and the view from the cliffs' edge down, down, down to the sparkling sea was mesmerizing, as if inviting me to soar and assuring me my rental car was capable of it. Swoop--the road rose and banked left, leaving a view of only sky, and I, well, I could keep going straight, couldn't I? And fly? I began to hyperventilate.

My fear of heights is not a fear of falling so much as the desire to fly.

Jenny, spying one of the rare pullouts on this route, urged me to stop and squeezed an eye-dropperful of Rescue Remedy onto my tongue. Whether the herb-and-alcohol mixture worked I can't say. But stopping, stretching, having a snack--these brought me back to sense. I handed her the keys. Jenny had not driven a stick for 20 years, but she agreed it was safer than letting me continue. We made it to our destination--the Museum of Icelandic Sorcery and Witchcraft--and I promptly forgot my crisis on the cliff. 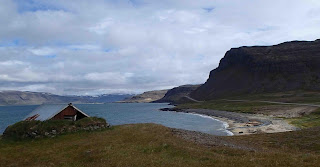 Six years and several trips to Iceland later, when I heard that a walrus had been spotted in the West Fjords, I didn't hesitate. I was researching the importance of walrus ivory in the Viking Age for my book about the Lewis chessmen, Ivory Vikings. I rented a Yaris and drove off to see it--or at least the bay it was sporting in, named "Bay of the Walrus Breeding Grounds."

Walruses are rare visitors to Iceland today, but these elephantine relatives of seals may have been what drew the first Viking settlers to this inhospitable island in the 9th century. Walrus ivory was the Vikings' gold. Light and long-lasting, walrus tusks made the perfect cargo for a Viking ship. Viking raids were bankrolled with walrus ivory. Viking trade routes were built on them.

The medieval Icelandic sagas, written some 300 years after the settlement of the country, say the founding fathers were fleeing tyranny, that they refused to kowtow to King Harald of Norway.

But ancient names of Icelandic headlands, islands, beaches, and bays refer to walrus. Tusks and bones—of adults and neonates—have been found at archaeological sites dating to Iceland's first settlement, in about AD 871.

After a hundred-some years, Iceland's walrus were extinct. The Viking hunters found new sources in Greenland's far north. By the Saga Age, a walrus in Iceland was an oddity. Only one saga tells of a walrus hunt, a flotilla of boats pursuing one lone beast on the south side of the peninsula for which I was heading.

On the ferry to the West Fjords I bumped into a friend. That "Bay of the Walrus Breeding Grounds" lay on the north side of a high, sheer cliff famous for its colonies of seabirds. At least one tourist has plunged to his death trying to photograph a cute puffin, Gugga reminded me. She, being afraid of heights, did not enjoy her visit.

Another tourist attraction was nearby: the Red Sands, a long golden beach that looked perfect (from the pictures I'd seen) for walruses to breed and bask on.

What kind of car are you driving? Gugga asked. A Yaris? You won’t make it. The road is very steep, and there's a hairpin turn, and, well, if you don't meet any other cars you might be okay on the way down, but your engine isn't big enough to make it back up.

I'd booked an expensive room in a secluded hotel in a broad bay just to the north. It had a red sand beach as well. I revised my itinerary.

But not, as it happened, enough. 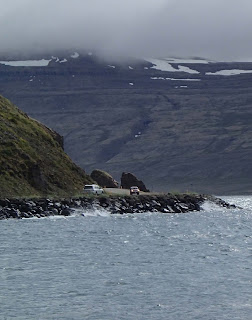 The roads were washboard gravel. No shoulders or break-down lanes. Guard rails were rare, as were lane markings--which was just as well, since these roads would be classified as single-track anywhere else in the developed world. It was a beautiful, sunny, windless day (it could have been much worse) and I was hyperventilating as the road swooped and soared and clung to the cliff edge. I stopped at every pull-out or picnic table I saw (at one stop I saw 14 camper vans in a caravan going the other way; thank heavens I was not sharing the road with them!), but there was no one to take the keys.

And no Rescue Remedy.

I began singing. "Hear me, smith of Heaven," goes a famous Icelandic hymn, "your poet begs for mercy." Ave Maria, gracia plena. "She’ll be coming round the mountain when she comes." I ran through my entire repertoire. At least it kept me breathing. I made it to the hotel, sank onto a soft bed with a view of the blissfully empty golden sand beach, and took the next 24 hours to recuperate.

I’d drive to the "Bay of the Walrus Breeding Grounds" before I turned for home, I told myself. It was less than 10 kilometers up the road.

That morning when I pulled back the drapes I saw a bank of fog rolling at freight-train speed across the gray ocean and rushing up the bluff. As I watched it blotted out the headland. I began to panic. The first mountain pass on my way home was the worse. So narrow it had designated passing spots--the edges of which were crumbling down the cliffside.

I drove as fast as I could, but failed to beat the fog. At the pass, sky and road were a uniform gray. I inched down the road, sweating, heart pounding, singing my lungs out. And Mary or Heaven’s maker or maybe the six white horses heard, and I met no other cars. I made it down and out of the fog.

I did not see a walrus in the West Fjords. I did not see the beaches they basked or bred on. And I am not driving back. 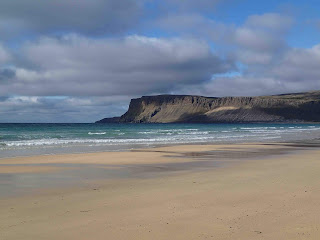