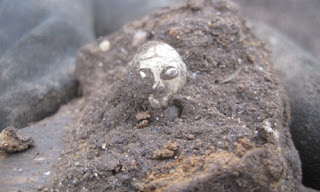 Last December, a man named Morten Skovsby found a small face peering up at him from a lump of frozen dirt. He'd been working with a group of amateur archaeologists using a metal detector near the village of Hårby in Denmark. His find, cleaned up, was an intricately detailed amulet made of gilded silver, about an inch tall, in the shape of a beautiful woman with long hair twisted into a ponytail. She carried a sword and shield.

She was immediately dubbed a "valkyrie." Why?

Because Snorri Sturluson, writing between 1220 and 1241, described valkyries as semi-goddesses with shield and sword (or spear) who accompanied dead heroes to Odin's feast-hall,Valhalla, and there served them mead.

In Heimskringla, Snorri quoted a poem by Eyvind Skald-spoiler (his nickname might mean "plagiarist") about the death of King Hakon the Good in 960. Although Hakon was a Christian king, the poet pictures him, not meeting St Peter at the Pearly Gates, but being carried off by valkyries to Valhalla. In Erling Monsen's translation, it reads:

Gauta-Tyr sent the Valkyries / Gondul and Skogul / To choose amonst the kings / Which of Yngvi’s race / Should go to Odin / And be in Valhalla …
Gondul said / As she took a spear shaft, / “The Aesir’s following grows, / When Hakon the High / Goes with so great an army / To the burg of the gods.”
The king heard / What the battlemaids said, / Those quick horsewomen, / They were ready to strike, / As they sat helmeted, / With shields by their side….
Said the rich Skogul, / “Gondul and I shall ride / To the gods’ green home / To tell Odin / That quickly the prince / Comes himself to see him.”
“Hermod and Bragi,” / Said the war father Odin, / “Go forth to meet Hakon, / For that warrior king / Is called hither to the hall.”…

Note that Eyvind doesn't call these battlemaids beautiful. Snorri doesn't either, in so many words. But by making being served mead by a valkyrie one of the perks of dying in battle, as Snorri does when describing Valhalla in his Edda, he makes it pretty easy for later readers to make that assumption.

It's not the only possibility. Eyvind, in fact, is in the minority when he makes the valkyries dignified horsewomen.

Poems and sagas written before--and after--Snorri's time describe the valkyries as monsters. They are troll women of gigantic size who ride wolves and pour troughs of blood over a battlefield. They row a boat through the sky, trailing a rain of blood. They are known by their “evil smell.”

In the part of Sturlunga Saga written by Snorri's nephew Saga-Sturla in the 1270s, and in which Snorri plays a major role, we learn of the dream of a man named Haflidi Hoskuldsson. According to Julia McGrew's translation:

"In the winter after Christmas he dreamed … he was in Fagraskogar and seemed to be looking up along Hitardal, where he saw a group of men riding down from inland. A woman rode at the head of their company, large and evil-looking, in her hand a cloth which hung down in tatters and dripped blood. Another group was coming against them from Svarfhol; they met one another west of Hraun, and fought. The woman then brandished the cloth over each man’s head, and when the ragged ends touched a man’s neck she jerked off his head. She said:

I move with bloody cloth,
I strike men into fire,
I laugh when I see them go
To that loathly place I know."

Snorri didn’t care for that kind of monstrous valkyrie. I think it's a reflection of the popularity of his works--over those of his nephew, among others--that the image of the valkyrie we hold in our heads today so closely matches that of the little gilded silver amulet  Morten Skovsky found in Hårby last December. 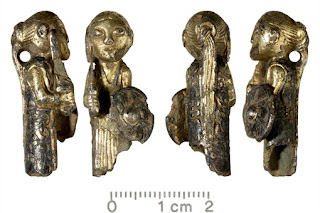 But there's another assumption we make when calling this amulet a valkyrie. Valkyries, all the poets and saga-writers agree, are not human. They are semi-goddesses--or trolls--but not real women. Why could this little amulet not depict a real woman? A true shield-maiden?

There are examples of women warriors in the sagas, too. The most famous is Hervor who, in an extremely spooky poem known as "The Waking of Angantyr," travels to the isle of Samsey to conjure her dead father up from his grave and get his sword, Tyrfing, which was made by the dwarfs. In Patricia Terry's translation, it says:

Now she saw the fire from the grave mounds and the living dead standing outside. She went toward then and was not frightened, passing through the fire as if it were smoke until she came to the berserks' graves. Then she said: … "May you writhe within your ribs, your barrow an anthill where you rot, unless you let me wield Dvalin's weapon--why should dead hands hold that sword?"

Replies her father,
"You are not at all like other people if you go to grave-mounds at night, helmed, in ring-mail, spear in hand, to stand here, warlike, and wake us in our halls."

Says Hervor,
"Men always thought me human enough before I set out to seek you here."

Before this amulet was found at Hårby, as Christopher Abram points out in his 2011 book, Myths of the Pagan North, other images have been labeled "valkyries." Writes Abram, "there has been a tendency to identify any female figure on an artefact found in a grave as a valkyrie: it is supposed that these objects were supposed to symbolize the dead person’s passage to Valhalla, or helped ensure it. Yet these so-called valkyries are most often found in women’s graves—the graves of people who would not go to Valhalla, which was reserved for the bravest and mightiest of (male) fighters. These female figures are sometimes depicted holding a cup. From the myths we know that one of the roles played by the valkyries was to serve mead or beer in Valhalla; but high-status women were also expected to honor their guests with drink here on earth. This depiction could, in other words, relate to a perfectly ordinary aspect of a woman’s life, rather than to the hyper-masculine cult of Odin."

Could it not also be true that carrying a sword and shield was "a perfectly ordinary aspect of a woman's life" in the Viking Age, and we've just been too biased against the idea of real women warriors to accept it?

Join me again next Wednesday at nancymariebrown.blogspot.com for another adventure in Iceland or the medieval world.