The Sunstone, or how did Vikings navigate? 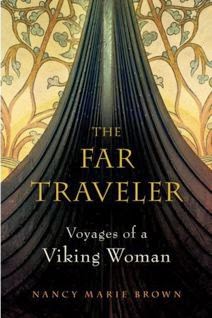 Elise Skalwold graciously calls it a typo. In her article "Double Trouble: Navigating Birefringence", she explains in scientific detail how the Vikings could use a crystal called a "sunstone" to navigate when out of sight of land. At the end of the article, she calls out my book:

"That ancient Viking mariners made such voyages sans modern instrumentation inspires awe in many, not least of all me, as I have traveled in those waters in more modern craft, as well as been out on a replica of a cabinless sea-faring longboat. For a glimpse into the Viking sea-faring world, the authors recommend The Far Traveler: Voyages of a Viking Woman by Nancy Marie Brown, but in regards to the sunstone, beware the typo which identifies it as 'Icelandic feldspar.'"

It should be "Iceland spar."

I'm not the only one to make this mistake, Elise told me when we met last October at Cornell University. The name "sunstone" is commonly used in English to refer to completely different minerals in the feldspar family, particularly a translucent type known as "aventurescent feldspar." This feldspar is sunny because it contains tiny, flat mineral inclusions that, when the stone is turned the right way toward the light, give off a bright flash.

Elise came to listen to me lecture on my latest book, Ivory Vikings, but also to give me a quick lesson in mineral identification. For Elise is a consulting gemologist. In her backpack, she had samples of Iceland spar and a copy of the book Secrets of the Viking Navigators, by Leif K. Karlsen, which she generously gave to me.

My reaction to the crystal she set in my palm that afternoon was very much like Karlsen's. He writes, "In a natural world that is filled with rare and exquisite examples of incredible uniqueness, sunstones defy the rational mind." 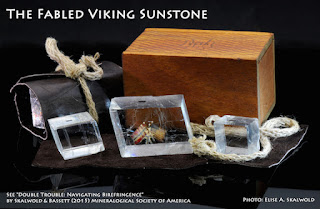 It is ice-clear. But worse, it looks machined. Living in a modern world I simply can't look at it properly. My eyes tell me it has been cut, that it's manmade, that it's fake.

And it's not. No wonder the Icelandic Saga of Hrafn Sveinbjarnarson considers the gift of a sunstone equal to that of a pair of fine stallions.

"Sunstones," Karlsen writes, "are roughly the shape of a three-dimensional parallelogram. All sunstones, without exception, have the same geometric shape and the same angularity. Take a large sunstone and break it into smaller pieces and you will have pieces with the exact same angles and geometry as the original. Additionally, every face of the stone has a tilt of 11.5 degrees."

Imagine finding something like that on an Icelandic mountainside. Just looking at it, you'd know it was magical.

And the Vikings did find sunstones there. Karlsen names three places in Iceland where the crystals are readily found. He even visited one, the site of an old mine. "In the days before synthetics," he notes, "this mineral was also used for various types of scientific optical equipment such as microscope lenses." Karlsen met an old man named Gisli who had worked at the mine in 1937 and offered to take him there.

"After some rough driving on gravel roads with several unbridged rivers and streams and then cross-country where there were no roads, we arrived safely at our destination," Karlsen writes. "We climbed up to a plateau about 400 feet up the mountain. ... Gisli pointed out numerous pieces of Iceland spar that had washed out of the vein higher in the mountain and then tumbled down the mountain in the scree. Some of the stones were clear and shiny where they had broken along the facets of the crystal as they fell. Others had an opaque surface due to weathering and abrasion. Many of the pieces we saw were at least 1.5 x 2 x 1 inches ... large and clear enough to be used for navigation."

How did the sunstone work? If you want the technical answer, read "Double Trouble: Navigating Birefringence."

But if you just want the gist of it, Karlsen presents it as a short story in his book, Secrets of the Viking Navigators. During a fictional Viking voyage, the navigator teaches his younger brother "the secrets of the sunstone."

"To use the sunstone," he says, "you must place a small spot of pine tar on top of the stone, on the side which faces towards the sky. When you are using the crystal for the first time, place a small wooden pointer along either one of the longest sides. This will be a guide for which side to point toward the brightest part of the sky. Then you must hold the stone overhead and view the stone from underneath. Notice the double image of the black dot? ... When you rotate the stone slightly back and forth, holding it flat, you will see that one spot fades and the other becomes darker. When the two images appear to be equal in value, note the position of the stone and the direction of the pointer. This is the true bearing to the sun."

Karlsen tried it out on a replica Viking ship sailing the coast of Norway in 1996. Playing the part of the navigator, he was able to teach each of his crew members how to use the sunstone--and confirmed their results with modern instruments. 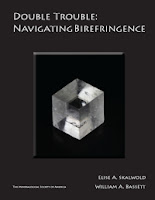 Its optical magic is most impressive under conditions of "Arctic sea smoke," when very cold air moves over warmer water and the ship is wrapped in fog almost to the top of its mast. "When the light from the rising or setting sun was lost in the fog bank, but the zenith was clear," he writes, "the navigator could tell the exact position of the sun by using the sunstone, even though the sun itself was unseen."

I'll remember that the next time I imagine a Viking voyage.

"Double Trouble: Navigating Birefringence," by Elise A. Skalwold and William Bassett, was published in late 2015 by the Mineralogical Society of American and is available online here: http://www.minsocam.org/msa/openaccess_publications/#Skalwold_01

Leif K. Karlsen's Secrets of the Viking Navigators was published in Seattle by One Earth Press in 2003.

For more on The Far Traveler, see my website at: https://www.nasw.org/users/nmb/books.html#FT
Posted by Nancy Marie Brown at 10:14 AM
Email ThisBlogThis!Share to TwitterShare to FacebookShare to Pinterest
Labels: Far Traveler, Viking ship, Vikings