A 19th-Century Traveler in Iceland

When I write about Iceland--or wherever I travel--I try to avoid sounding judgmental. I'm there to learn, to see something new. I hate the current fashion of snarky travel-writing and had always thought it something rather modern.

It's not. Here's a description of the inside of an Icelandic turfhouse--especially the main room or badstofa--from a report on leprosy in Iceland filed in 1895 by Dr. Edward Ehlers. (Thanks to Jack in Colorado for sending me this): 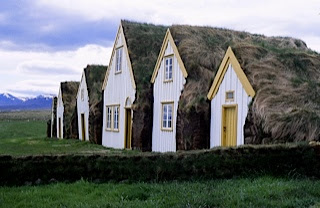 "The Badstofa has six to eight fixed bedsteads, or rather large wooden boxes, each box intended for two or three persons, who usually sleep head against feet and feet against head.
"If you enter this Badstofa when 13 to 14 persons lie sleeping there, first of all you feel a temperature which certainly both summer and winter reminds you of the tepidarium of a Roman bath, but surely here the likeness ceases. A suffocating stink and an unwholesome smell meets you. It is the smell of the mouldy hay, of the sheepskin quilts that are never dried or aired; it is the smell of the dirt which is dragged into the house on the clumsy Icelandic skin shoes that want double soles, and are quite unqualified to keep out the dampness.

"In this dirt a confused mixture of cats, dogs, and children lie reeking on the floor, exchanging caresses and echinococci; it is the smell of the wet stockings and the woollen shirts which hang to dry next to a slice of dried halibut ("Rekling") or the dried cod's head--this dreadful irrational favourite dish, for which the Icelander pays four kroner (4s. 6d.) a hundred. And if you poke your nose into the corners of the Badstofa, you will find a bucket in which the urine of the whole party is gathered; it is considered good for wool-washing. 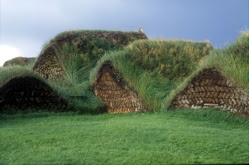 "I shall never succeed in picturing all the details of such an interior, which, in addition, you may imagine as being heated in the winter, at the places where they have no turfs, with the sheep's dried excrements, a kind of fuel which spreads a penetrating smell of nitre and burnt wool."
Dr. Ehlers was in Iceland to research the causes of leprosy. His conclusion: "It is the absolute want of cleanliness plus Armauer Hansen's bacillus, which in such an interior finds its true paradise." You can read his whole essay in Newman, Ehlers, and Impey, Prize Essays on Leprosy (London: New Sydenham Society, 1895), pp 169-70, available on Open Library.

If you want to visit a badstofa, I recommend the one pictured above, from the Skagafjord Heritage Museum at Glaumbaer in northern Iceland. It was the home of Gudrid the Far-Traveler, heroine of my nonfiction book, The Far Traveler. If you visit Glaumbaer, be sure to say hi to Sirri for me. And don't miss the opportunity to try the fish soup in the museum restaurant.