The first time I flew to Iceland, in 1986, I felt immediately at home. It was a strange feeling. I’d grown up in deep oak woods—Iceland had few trees taller than my head. There was no ocean near my home in Pennsylvania, no black beach, no wailing wind or horizontal rain, no tumbling waterfalls, no lava fields, no gleaming glaciers, no jewel-green fields alive with herds of horses. But in Iceland that first time, I felt I’d been there before. The landscape seemed insistently familiar.

Friends told me of having had the same feeling. Had we lived there in a previous life, I wondered? Did we have Viking blood?

It puzzled me for years, until I read a brilliant scholarly book by Marjorie Burns called Perilous Realms: Celtic and Norse in Tolkien’s Middle-earth, published by the University of Toronto Press in 2005. In it Burns argues that the landscape of JRR Tolkien’s Middle-earth (except for the very-English Shire) was essentially Icelandic. 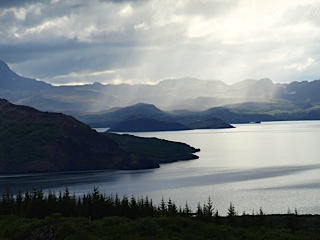 I had “traveled” to Iceland numerous times before 1986, unknowingly, while reading and rereading Tolkien’s books. Through college Tolkien had been my favorite author (in spite of the scorn such a confession brought down on an English major at an American university in the late 1970s, where fantasy was derided as “escapist” and unworthy of study). From his biography, I knew Tolkien had begun reading Old Icelandic in his teens. He loved the cold, crisp, unsentimental language of the Icelandic sagas, their bare, straightforward tone like wind keening over ice. He was drawn to the “Northernness” of the Eddas: To their depictions of dragons and dwarves, fair elves and werewolves, wandering wizards, and trolls that turned into stone. To their portrayal of men with a bitter courage who stood fast on the side of right and good even when there was no hope at all.

Reading the sagas and Eddas was more important than reading Shakespeare, Tolkien argued, because the Icelandic books were more central to our language and our modern world. Egg, ugly, ill, smile, knife, fluke, fellow, husband, birth, death, take, mistake, lost, skulk, ransack, brag, and law, among many other common English words, all derived from Old Norse. In Tolkien’s lifetime (though not by him), Snorri Sturluson’s Edda was described as “the deep and ancient wellspring of Western culture.”

But I also knew that Tolkien had never visited Iceland. 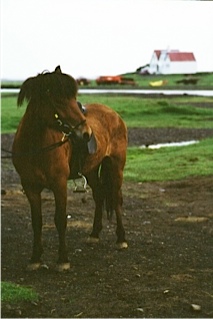 Marjorie Burns solved the riddle by showing how deeply Tolkien had been influenced by his reading of William Morris’s Journals of Travel in Iceland, 1871-73.

The hobbit Bilbo Baggins’s ride to “the last homely house” of Rivendell, for example, matches one of William Morris’s excursions from the 1870s point-for-point. Both riders are fat, timid, tired, and missing the small comforts of home. Each sets out on a charming pony ride that turns dreary, wet, and miserable. The wind is cold and biting. The landscape is “doleful,” black, rocky, with “slashes of grass-green and moss-green,” Tolkien writes. Chasms open beneath their feet. Bogs and waterfalls abound. The pony stumbles, the baggage (mostly food) is lost, the fire refuses to light. The rider nods off on the last leg and is astonished: There was “no indication of this terrible gorge till one was quite on the edge of it,” Morris writes. Narrow, it lay between steep cliffs cut by a deep green river. “We rode down at right angles into the main gorge, with a stream thundering down it; we rode round the very verge of it amidst a cloud of spray from the waterfall.” Finally the gorge debouched into a green valley with—not the elves’ Rivendell—but a handsome Icelandic farmstead. “A sweet sight it was to us: we rode swiftly down,” Morris writes, and soon were happily “out of the wind and rain in the clean parlor, drinking coffee and brandy, and began to feel that we had feet and hands again.” 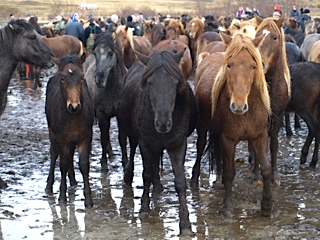 I’ve ridden that ride (though not the exact route: that’s a plan for the future). But the rain, the cold, the biting wind, the peckishness, the fatigue, the astonishment at the landscape, the deep gratitude for the Icelanders’ warm hospitality, the thrill of feeling at the end of the ride “that we had feet and hands again”—all these are very familiar. All these make Iceland feel like home.

This essay was adapted from my book-in-progress, Song of the Vikings: Snorri and the Making of Norse Myths, due out in October from Palgrave Macmillan.