A Viking Woman in America 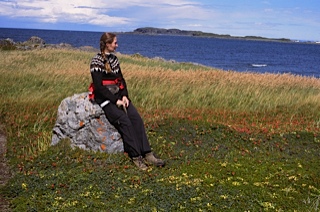 A lot of the fun of being a writer doesn’t make it into the final book. When I was researching The Far Traveler, for example, I visited L’Anse-aux-Meadows, the village in northwestern Newfoundland where in the 1960s Helge and Anne Stine Ingstad discovered the only uncontested archaeological proof that Vikings visited America around the year 1000.

As Clayton Colbourne, a Parks Canada guide with a ginger beard and a happy tongue told me, a local farmer named George Decker took the Ingstads around to see what he called the Indian mounds.

“We used to play on those mounds as kids,” Colbourne said. “There were eleven kids in my family. We had cows, horses, about ten sheep. My grandmother used to spin her own wool. My mother sent it out for spinning, but she knitted all night. Mittens for eleven kids, you know. There was no TV.” Colbourne digressed a little further to describe the thrill of skating on black ice—sea ice just one night thick—and how he still, at middle-age, will feed his “lust for risk” by running his snowmobile out onto the ice (in the local accent, the word comes out “hice”) before it’s safe. Sank it in the bog last year, as a matter of fact.

There are no cows or horses or sheep in this remote corner of Newfoundland now, Colbourne confirmed. No farms at all; only one place that sells a few turnips. Since the road went through to bring tourists to the Viking site, he and the rest of the forty or fifty year-round residents have relied on trucked-in food paid for by their Parks Canada jobs and the summertime profits from restaurants and guest houses. After it became a UNESCO World Heritage Site in 1978, they even learned to pronounce their birthplace more properly: “Lance-O-Meadows” instead of “Lancy Meadows.”

“George Decker,” Colbourne said, resuming the subject at hand, “used to make hay on those mounds. He staked it out—that means, he used it but he didn’t own it. He picked that place because the grass was so tall.” 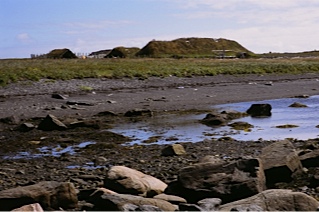 The Spindle Whorl
The artifact found at L’Anse-aux-Meadows that speaks most eloquently to me is a spindle whorl—proof that a Viking woman was on the expedition, for yarn-spinning was women’s work in Viking culture. Birgitta Wallace, who began working with the Ingstads in the late 1960s and took charge of the dig in 1975, told me how it was found.

“There was this young American boy, Tony Birdsley—he’s now a lawyer. His father was in charge of a big factory in Corner Brook and was very active in the Early Sites organization. He got the Newfoundland premier interested in L’Anse aux Meadows. So anyway, Tony was working for us and he was finding one stone after another.

“‘Birgitta,’ he would say, ‘is this anything?’
“‘No, Tony, it’s nothing.’
“‘Is this anything?’
“‘No, it’s nothing.’
“We did this over and over. Then he showed me the spindle whorl. I said, ‘Anne Stine! Come and look!’ And we hopped and danced all around, Anne Stine in her yellow rubber pants and me in my white rubber pants, and Tony called over to Junius Bird”—a distinguished anthropologist from the American Museum of Natural History—“and said, ‘What did I find? They’re all going crazy.’

“It had been a horrible, miserable day,” Birgitta said, “cold and wet, one of those days when you work from teacup to teacup. I had brought a bottle of champagne in my backpack, and you can bet it was cracked open that night!” 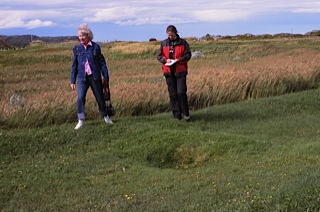 A Pile of Rubble
I had arranged a month before to meet Birgitta at L’Anse-aux-Meadows during one of her periodic trips to consult with the staff and Viking reenactors there. We were to rendezvous at the visitors’ center, but as I toured the largest of the reconstructed houses—a spacious and sensible structure, with four rooms in a line—I came upon her in a far corner, deep in a discussion with Loretta Decker, the park supervisor, about changing the smoke holes in the roof to make them more historically accurate.

As we walked outside to see the actual ruins, Birgitta explained that she has spent many years reanalyzing Anne Stine’s work. “I’ve looked at all the photos, plans, and drawings—and I took notes at the time. I have gone back to the find bags and the earliest reports. They tend to be the most correct.”

The walls the Ingstads mapped are now outlined by low grassy ridges interrupted by door openings, so that tourists can walk into and through the original houses without destroying the last traces of them. Birgitta darted from one wall to another, pointing with a sneakered foot at the mistakes: “This room had a very clear door out to the west, toward the bog.” No such entrance is cut in the ridge. “That pit is not supposed to be here. And this is a wing—there’s a wall over there.” I see no sign of it. The house outlines had been made before Birgitta’s reanalysis.

She stopped beside the lower doorway of the largest house. “That’s where the spindle whorl was found,” she pointed outside, adding that the Viking woman had probably dropped her spindle somewhere inside the room, for the whorl had been found in a pile of recent rubble. “Loretta’s father and his father, George Decker, thought there was treasure in this mound,” Birgitta said. “When they were digging, they took the soil from inside the house, and threw it out there.”

Clayton Colbourne at the park office had told me a more politically correct version of the same story: rather than treasure hunting, George and his son were digging a post hole for a fence. The Viking spindle whorl—true treasure, if only they had known it—was turned up, unnoticed, by their shovels and promptly reburied.

You can read more about the L’Anse Aux Meadows historical site at the website Canadian Mysteries,
http://www.canadianmysteries.ca/sites/vinland/home/indexen.html

Join me again next Wednesday at nancymariebrown.blogspot.com for another writing adventure in Iceland or the medieval world.
Posted by Nancy Marie Brown at 11:19 AM