In a way, my new book, Looking for the Hidden Folk: How Iceland’s Elves Can Save the Earth, is about the power of stories. We all tell stories. We always have. But we don’t always take responsibility for the effects of our storytelling. Stories shape how you see the world. They determine not only how you think of elves, but also how you think of such “real” things as mountains—or creeping thyme. 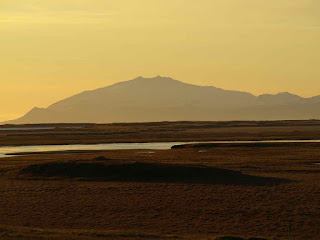 “When we look at a landscape,” writes Robert Macfarlane in Mountains of the Mind, “we do not see what is there, but largely what we think is there. … We read landscapes, in other words, we interpret their forms in the light of our own experience and memory, and that of our shared cultural memory. … What we call a mountain is thus in fact a collaboration of the physical forms of the world with the imagination of humans—a mountain of the mind.”

A story that cast a magic spell upon all mountains was Edmund Burke’s A Philosophical Enquiry into the Origin of Our Ideas of the Sublime and Beautiful. Burke, from Ireland, published it in 1757, when he was twenty-eight. He was, writes Macfarlane, “interested in our psychic response to things—a rushing cataract, say, a dark vault or a cliff face—that seized, terrified, and yet also somehow pleased the mind by dint of being too big, too high, too fast, too obscured, too powerful, too something, to be properly comprehended.” Instead, such things inspired “a heady blend of pleasure and terror. Beauty, by contrast, was inspired by the visually regular, the proportioned, the predictable.” It’s the frisson of fear that makes a Icelandic volcano, or a cliffside swathed in fog, sublime. 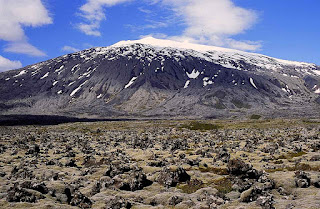 Burke’s book, says Macfarlane, “provided a new lens through which wilderness could be viewed and appreciated.” Macfarlane’s own books do much the same for me. In The Old Ways, he mentions an archaeologist named Anne Campbell who was “close-mapping” a moor. Why that moor? “It is the most interesting place in the world to me,” she told Macfarlane. “So I spend most of my time walking shieling tracks, paths, and the streams and the walls that used to divide up the land. Then I talk to people and try to fix their memories to those particular places.”

I once visited that part of Scotland, the western edge of the Isle of Lewis, but did not meet Campbell walking her moor. Still, a story Macfarlane told, a little aside, gave me a new perspective on Iceland (the most interesting place in the world to me). Macfarlane wrote, “When it wasn’t too cold, and not so dry that the heather was sharp, Anne liked to walk barefoot on the moor. ‘It takes about two weeks to get your feet toughened up so that it’s no discomfort. And then it’s bliss.’ You should try it when you’re out there. Take those big boots of yours off!’” 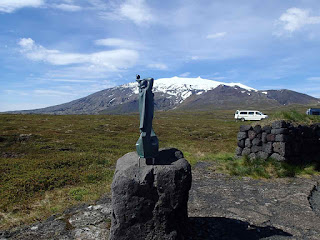 On the western tip of Iceland’s Snaefellsnes peninsula sits the long-abandoned farm of Laugarbrekka, where Gudrid the Far-Traveler was born in about 982. I’ve written two books about Gudrid, sister-in-law to Leif Eiriksson, the Viking explorer credited with discovering America some five hundred years before Columbus. Yet Gudrid spent more time in the New World than Leif did. Gudrid is the real Viking explorer, and a recurring inspiration to me. In 2016, on a sunny Sunday in late July, I visited her monument at Laugarbrekka for the umpteenth time. I walked out to the laug or bathing pool, which is no longer bathwater warm, took off my boots, rolled up my pants, and waded in, but the sharp stony bottom of the lake kept me from going far.

Back on the bank, I dabbled my toes and gazed at the glacier-capped volcano, Snaefellsjokull, its corruscations of lava catching the light, until it was time to go, then, remembering Campbell’s bliss, decided to walk barefoot back to the car. It was lovely. The heath was springy and soft and comforting to my feet—though they were not even toughened up. Picking along, carefully placing each foot, I found ripe crowberries and almost ripe blueberries, some very blue but still tart. The grass was soft, too, but I found myself preferentially stepping on the berry bushes and fragrant creeping thyme, which tickled. Who would have thought that thyme (not time) equaled bliss? 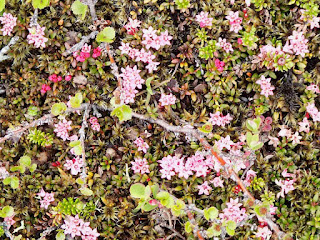 You can read more about Iceland and my many adventures there in Looking for the Hidden Folk: How Iceland's Elves Can Save the Earth, which will be published on October 4 by Pegasus Books. It is now available for pre-order through Simon & Schuster distributors or through my shop on Bookshop.org. Disclosure: As an affiliate of Bookshop.org, I may earn a commission if you click through and make a purchase.
Posted by Nancy Marie Brown at 11:00 AM
Email ThisBlogThis!Share to TwitterShare to FacebookShare to Pinterest
Labels: Iceland, Looking for the Hidden Folk, travel