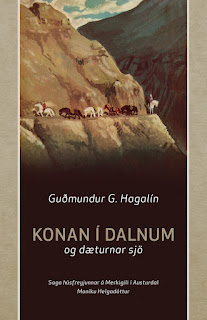 The farm of Merkigil in Skagafjörður, north Iceland, is famous for two reasons: 1) the treacherous gorge you had to cross to get there, before the glacial river beside the farm was bridged in 1961; and 2) the grand, two-story concrete house built by the widow Moníka with the help of her daughters—years before the river was bridged.

This August, I rode a horse to Merkigil and stayed in Moníka’s house. The trip was organized by my friends Fjóla and Elvar from Syðra-Skörðugil (from whom I bought my first Icelandic horse 25 years ago, as you can read in A Good Horse Has No Color). A few months before, on Fjóla’s recommendation, I bought and read Moníka’s biography, Konan í Dalnum og Dæturnar Sjö (The Woman in the Valley and her Seven Daughters) by Guðmundur G. Hagalin. There I learned these things about Moníka’s remarkable life:

In 1924, Moníka was working in a fish factory in Reykjavík when she received a letter. We would call it a love letter. She wasn’t so sure.

Moníka was then 23, the seventh child of 10 from the little farm of Ánastaðir in Skagafjörður, north Iceland. She was small, sturdy, and powerful, and known as a hard worker. At the young age of 11, she had left home to go to work, spinning, milking, making hay, and caring for animals, children, and old folks at various farms in the district, where she earned a reputation as a young woman you could count on. Then she had followed her two sisters to Reykjavík, where their uncle was foreman at a fish factory, and joined thirty-some other women cleaning and salting fish; her record was 3,000 fish in a day—she found it boring to not work as hard as she could. But she also liked having her evenings free, when the work day was over, and having money in her pocket to buy pretty clothes and enjoy the city, plus more put aside to bring home to her family when she visited them, as she was planning to do that summer.

Then she got the letter. When she was 11, her very first summer away from home, she had worked at haymaking with a boy named Johannes; he was about 14. The two of them had been sent off to a nearby farm his father had leased and told to hay it; they cut the grass with a scythe, raked it until it was dry, bagged it up into bales, and transported home 40 horse-loads of fine hay.

Never have I forgotten that summer we made hay, the letter read. It was from Johannes. He and his parents now owned half of a farm named Merkigil, deep in one of the valleys of Skagafjörður. His mother was ill, he said, and he wondered if Moníka could come to Merkigil and take charge of the household. 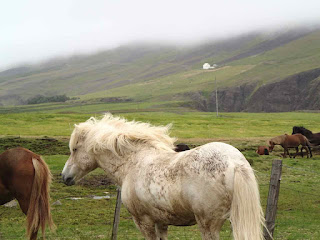 Moníka, too, remembered their hay-making. She had become quite fond of Johannes, who was funny and easy-going and hard-working; she recalled how quiet it was in the evenings, as they walked home side by side, satisfied with their day’s accomplishments. What is he really asking me, she wondered. She put off replying to his letter until, finally, it seemed pointless to do so: He must have found someone else by now, she thought.

She took the boat home, where she immediately ran into a neighbor who said, If you were a man, I’d have a job for you.

And what job, Moníka asked, do you have that only a man can do?

He needed someone to cut, dry, bale, and transport seventy horse-loads of hay, and he was willing to pay well.

I’ll do it, she said. And she did. She visited her parents for a few days, then took a tent, went up to the hayfield with a scythe and a rake, and started making hay. It took her five weeks. 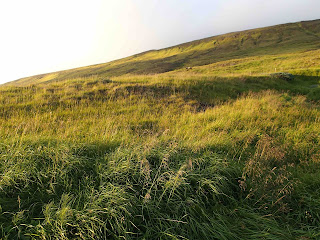 When the haymaking was over, she packed up her things and prepared to return to Reykjavík. But the boat was late, and she had to wait several days in the harbor town. While she was there, she was accosted by a man named Gísli, who had been searching all over for her, he said. He had a job that only she could do. He needed someone who could work hard, both inside the house and on the farm, and who was also a good nurse, for there was an old, sick couple who desperately needed help. His sister was with them now, but she couldn’t stay.

And where is this farm? Moníka asked, and was startled when he replied: Merkigil. Almost in spite of herself, she found herself saying yes. Gísli gave her no time to change her mind. He had four strong horses with him, and they set off at once to ride the 50 miles to Merkigil. Late in the evening, they reached the treacherous gorge.

You’re not afraid of heights, I hope, Gísli said.

Of course not, said Moníka, though she paused on the brink of the cliff, and looked down into the deep, dark gorge, its bottom hidden in the shadows. They got off their horses and led them down the switchbacked trail, which was snow-covered and a little icy in places, herding their two extra horses ahead of them. They crossed the rocky stream at the bottom, and climbed up the steep slope on the other side.

Caption: In 2022, I crossed the Merkigil gorge in the opposite direction, on a brilliant summer day. It was still scary. Here we are on the brink, watching our loose horses climb the opposite wall of the canyon. 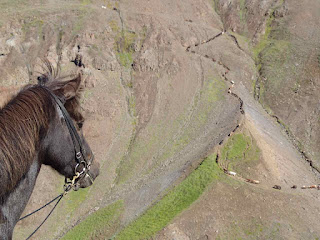 Caption: The gorge stretching out below us as we climb and climb. 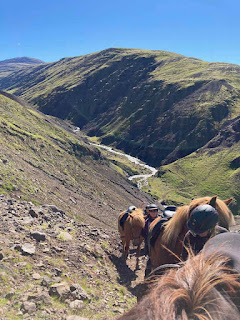 Caption: I got an assist from the tail ahead of me. 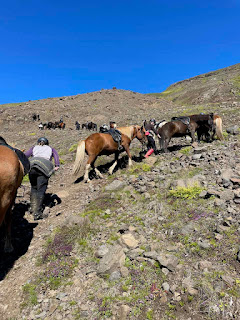 Caption: Finally we reached the top. 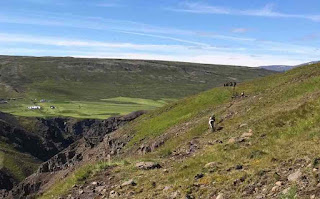 A short ride ahead was a cluster of buildings with grass roofs: the barns and houses of Merkigil. Gísli’s sister was delighted to see him and Moníka, when they arrived that night in 1924. She introduced Moníka to 93-year-old Sigurbjörg, who was bed-ridden, and her slightly more vigorous husband, Egill. Then she took Moníka next door to the main living room, where she would sleep. There she was greeted by Johannes and his father, and by Johannes’s mother, who was also bed-ridden. So you have come, she said, thank heavens.

No one said anything about Johannes’s letter, but two years later he and Moníka married. They had eight children—seven daughters and one son—and then, in 1944, Johannes died of cancer. By then, the whole farm was theirs, and the loans were all paid off. They had three milk cows, some steers, 200 sheep, eight riding horses, three breeding horses, and some untrained foals. The fields were in good shape and well-fenced. Moníka decided to stay and run Merkigil with her children.

Her oldest daughter, Elín, was then 19; she took charge of the sheep. She and her sister Margrét, 17, also did the haymaking, when recurring stomach pains kept Moníka from doing it. They were helped by Jóhanna, 16, and Guðrún, 14. All went well, in general—except when sheep got lost in the fog and horses fell into the canyon and had to be rescued. 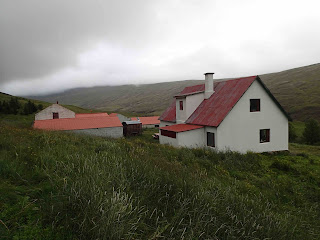 Moníka’s biggest aggravation was that the house, a traditional wooden frame clad with turf blocks, was falling down around their ears. Turf houses need a lot of maintenance, and the work is heavy and takes some skill. With the help of neighbors, she cut and dried new turf and repaired the walls as best they could, but by 1948 Moníka had decided it was time to build a modern, concrete house.

The house she designed was two stories tall, with high ceilings and wide windows. She took out a loan, hired a team of housebuilders, and bought building materials, having them trucked as far as the road went, past the neighboring farm of Gilsbakki. Then she and her daughters loaded everything onto horseback—wood for the concrete forms, roofing panels, window glass, doors, a kitchen stove, a bathtub—and conveyed them down the switchbacked trail into Merkigil gorge and up again to the new house site.

The hardest thing to carry was the cement mixer, but Moníka’s daughters were determined to figure out a way—otherwise, they knew, they’d be the ones mixing the cement by hand—and they succeeded. Then, to save themselves a little more work, they rigged up a motor for it: They wrapped a long rope around the drum of the mixer, and secured it to a horse, which one of the younger children led away. Once the horse reached the end of the rope, the cement was mixed and ready to pour.

By 1950, the house was finished, inside and out. Three years later, Moníka was awarded the Knight’s Cross of the Order of the Falcon by the president of Iceland, for her services to the nation. She was the first woman so honored. At first she was dumbfounded. Why was a simple housewife and farmer being given this honor? Then she thought about it. As she told her daughters, I suppose I deserve it as much as anyone does. 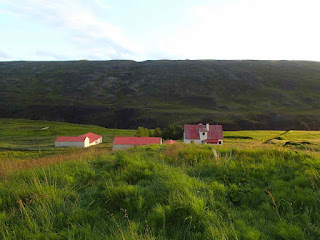 You can read more about Iceland and my many adventures there in my new book, Looking for the Hidden Folk: How Iceland's Elves Can Save the Earth, which will be published on October 4 by Pegasus Books. It is now available for pre-order through Simon & Schuster distributors or through my shop on Bookshop.org. Disclosure: As an affiliate of Bookshop.org, I may earn a commission if you click through and make a purchase.
Posted by Nancy Marie Brown at 11:00 AM
Email ThisBlogThis!Share to TwitterShare to FacebookShare to Pinterest
Labels: Iceland, Icelandic horse, Looking for the Hidden Folk, travel
Newer Post Older Post Home