Viking Language 1 by Jesse Byock is the book I was looking for 30 years ago when I decided I had to learn to read the Icelandic sagas in the original.

As I wrote in my first book, A Good Horse Has No Color: Searching Iceland for the Perfect Horse, I'd been introduced to the sagas in my second year of college by a professor of folklore, Sam Bayard, an impish man, small, bald, rotund, and hunched like a wise turtle walking upright. He had an impressive nose, which he periodically aroused with snuff taken from one of the half-dozen boxes secreted in his pockets. He would courteously offer me some, smile when I declined, then, snuffling up a liberal pinch, harrumph into a large handkerchief which he subsequently used to brush the dust off his breast. His snuff boxes were antiques, portable works of art carved of horn, cast in silver or brass with ancient scenes of hunts or warfare, shaped of handsome woods. Another pocket held a tin whistle, which he'd occasionally demonstrate. A fiddle hid in his filing cabinet. A narrow bookshelf along one wall was crammed with Icelandic sagas, which he loaned to me, one after the next.

When the translations proved stilted or old-fashioned or, worse, non-existent, I decided I needed to learn Old Norse. The professor who taught me the language, Ernst Ebbinghaus, was an icon of his occupation—high forehead, aquiline nose, a halo of silky white hair. He wore French cuffs and ascots. I found him inordinately distant and stiff, traits I linked to his European training. He was Old School, German-educated. He even knew Sanskrit. We translated bits of sagas into our notebooks, puzzling over the three genders and four cases, singular and plural, into which the grammar slotted the words, memorizing the 24 different forms of such essentials as "the" or "this" or "who." Ebbinghaus stood above us and explicated such words as ójafnaðarmaðr: the unjust, overbearing man, the man who upsets the balance of the world. He refused to hazard pronunciation. No one knew how to pronounce Old Norse, he said. The language was dead. Like Latin. I found that vastly disappointing.

Fortunately, before much longer, I went to Iceland for the first time and learned that Old Norse wasn't "dead" after all. It had just shifted into Icelandic, changing about as much as English has since Shakespeare's day. Neither are the sagas of only antiquarian interest in Iceland. They are alive, part of—and preserved by—the landscape. Icelandic schoolchildren study the sagas in history class. Modern Icelanders trace their family trees to heroes in the old tales. The medieval past is remembered in the name of every hill and farmstead. There is a saga everywhere you turn. 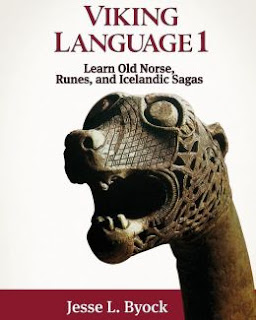 Jesse Byock's book Viking Language 1 takes all this into consideration. The full title is Viking Language 1: Learn Old Norse, Runes, and Icelandic Sagas, but the back cover blurb clearly describes the book as "an introduction to Old Norse and Icelandic. The beginner has everything in one book: graded lessons, vocabulary, grammar, exercises, pronunciation, culture sections, and maps. The book follows an innovative method that speeds learning. Because the grammar of Modern Icelandic has changed little from Old Norse, the learner is well on the way to mastering Modern Icelandic" (my emphasis).

That said, Byock's book has also solved a mystery for me. I've spent 30 years reading Old Norse. I can sit down and read a saga and enjoy it. I can even translate it. But I've been trying to learn Modern Icelandic for the same length of time, and every time I return to Iceland (and I'm currently on trip number 17), I feel like I'm starting over. I'm grasping for words, entirely unable to express myself. I feel like an infant just learning to talk. I'm proud when children will converse with me. To write a simple letter I have to surround myself with dictionaries.

Why? Byock has the answer. He's structured his book around it: "The total vocabulary of the sagas is surprisingly small," he writes. "Excluding names, there are only 12,400 different words in the corpus of the family sagas out of a total word count of almost 750,000. The 70 most frequently used words account for nearly 450,000 or 60% of the total word count. As one might expect this 70 contains the most frequently repeated prepositions, pronouns, conjunctions, verbs, and adjectives. The greatest benefit is found in learning the 246 most frequent words…"

For information on Jesse Byock's Viking Language 1: Learn Old Norse, Runes, and Icelandic Sagas go to www.vikingnorse.com. There you can even hear someone read Old Norse aloud.

Join me again next Wednesday at nancymariebrown.blogspot.com for another adventure in Iceland or the medieval world.