Seven Norse Myths We Wouldn’t Have Without Snorri: Part II 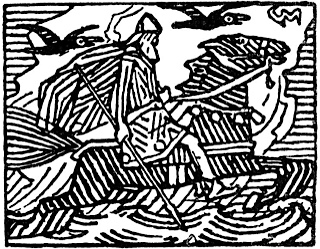 It was Neil Gaiman who convinced me. Reading American Gods, I was delighted to see the character Mr. Wednesday echoing Snorri Sturluson, the 13th-century Icelandic writer whose biography forms the core of my book Song of the Vikings: Snorri and the Making of Norse Myths.

Mr. Wednesday, I knew, was the Norse god Odin (from the Old English spelling, Woden’s Day). In American Gods he is a tricky figure to pin down, attractive, untrustworthy, all-powerful, but also afraid—for the old gods have been nearly forgotten. And that, Gaiman implies, would be a disaster for all of us.

Which is exactly what Snorri Sturluson was trying to say in his Edda.

Seeing Snorri through Gaiman’s lens convinced me he was more than an antiquarian, more than an academic collector of old lore. Like Gaiman himself, Snorri was a wonderfully imaginative writer. 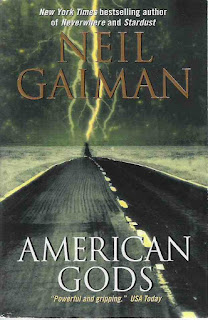 And both of them—all writers, in fact—are devotees of the god of Wednesday who, according to Snorri, is the god of poetry and storytelling.

We know very little about Odin, except for what Snorri wrote. We have poems containing cryptic hints. We have rune stones whose blunt images and few words tantalize. Only Snorri gives us stories, with beginnings and ends and explanations—but also with contradictions and puzzles.

Almost everything we know about Norse mythology comes from Snorri’s Edda and Heimskringla, two books he wrote between 1220 and 1240 to gain influence at the Norwegian court.

The Edda is a handbook on how to write Viking court poetry, much of which refers obscurely to Norse myths. The god Odin in Snorri’s Edda is the ruler of heaven and earth, the greatest and most glorious of the gods. Odin and his brothers fashioned the world from the body of the giant Ymir. But Snorri also describes Odin in very Christian terms as the All-father.

This Odin overlaps with, but is not entirely the same as, the King Odin in Snorri’s Heimskringla. Heimskringla means “The Round World” or “The Orb of the Earth” (from the first two words of the introduction). It is a collection of 16 sagas in which Snorri traces the history of Norway from its founding in the shadows of time by Odin the Wizard-King (a human king who later was mistakenly revered as a god, Snorri explains) to 1177 A.D., the year before Snorri’s birth.

It is this Odin the Wizard-King who inspired Mr. Wednesday—as well as Tolkien’s Gandalf, which is a subject for another time.

King Odin “could change himself and appear in any form he would,” Snorri writes, including bird, beast, fish, or dragon. He raised the dead and questioned them. He owned two talking ravens who flew far and wide, gathering news. He worked magic with runes, and spoke only in verse or song. With a word he “slaked fire, stilled the sea, or turned winds in what way he would.” He knew “such songs that the earth and hills and rocks and howes opened themselves for him,” and he entered and stole their treasures. “His foes feared him, but his friends took pride in him and trusted in his craft.”

Long after King Odin’s death, when he had become a god, Snorri says, the missionary King Olaf Tryggvason, who forced Norway to become Christian around the year 1000, held a feast to celebrate Easter. An unknown guest arrived, “an old man of wise words, who had a broad-brimmed hat and was one-eyed.” The old man told tales of many lands, and the king “found much fun in his talk.” Only the bishop recognized this dangerous guest. He convinced the king that it was time to retire, but Odin followed them into the royal chamber and sat on the king’s bed, continuing his wondrous stories. The bishop tried again. “It is time for sleep, your majesty.” The king dutifully closed his eyes. But a little later King Olaf awoke. He asked that the storyteller be called to him, but the one-eyed old man was nowhere to be found.

Nowhere but in Snorri’s books. And, perhaps, in his soul. 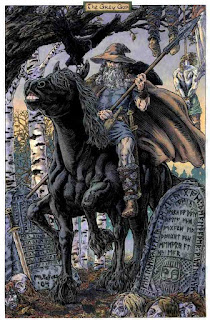 Odin One-eye was Snorri’s favorite of all the Norse gods and goddesses. Following tradition, he placed Odin in his Edda at the head of the Viking pantheon of 12 gods and 12 goddesses. Then he increased his power so that, like the Christian God the Father, Snorri’s Odin All-Father governed all things great and small.

Icelanders had, in fact, long favored Thor, the god of Thursday. They named their children after the mighty Thunder God: In a twelfth-century record of Iceland’s first settlers, a thousand people bear names beginning with Thor; none are named for Odin. Nor did the first Christian missionaries to Iceland find cults of Odin. Odin is rarely mentioned in the sagas. For a good sailing wind Icelanders called on Thor. But Snorri wasn’t fond of Thor—except for comic relief. Thor was the god of farmers and fishermen.

Odin was a god for aristocrats—not just the king of gods, but the god of kings.

He had a gold helmet and a fine coat of mail, a spear, and a gold ring that magically dripped eight matching rings every ninth night. No problem for him to be a generous lord, a gold-giver.

He had a grand feast hall named Valhalla, where dead heroes feasted on unlimited boiled pork and mead. Snorri is our only source for many of the details of what Valhalla looked like: its roof tiled with gold shields, the juggler tossing seven knives, the fire whose flames were swords—even the beautiful Valkyries, the warrior women who serve mead to the heroes. Old poems and sagas that Snorri does not quote describe the Valkyries as monsters. These Valkyries are troll women of gigantic size who ride wolves and pour troughs of blood over a battlefield. They row a boat through the sky, trailing a rain of blood. They are known by their “evil smell.” One rode at the head of an army carrying a cloth “which hung down in tatters and dripped blood.” She whipped the cloth about, “and when the ragged ends touched a man’s neck she jerked off his head.” Snorri didn’t care for that kind of Valkyrie. 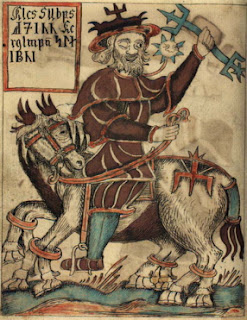 Finally, Odin had the best horse, the eight-legged Sleipnir. Snorri is our only source for the memorable comic tale of how Odin’s wonderful horse came to be.

Here’s how I tell it in Song of the Vikings:

One day while Thor was off fighting trolls in the east, a giant entered the gods’ city of Asgard. He was a stonemason, he said, and offered to build the gods a wall so strong it would keep out any ogre or giant or troll. All he wanted in return was the sun and the moon and goddess Freya for his wife.

The gods talked it over, wondering how they could get the wall for free.

“If you build it in one winter, with no one’s help,” the gods said, thinking that impossible, “we have a deal.”

“Can I use my stallion?” the giant asked.

Loki replied, “I see no harm in that.” The other gods agreed. They swore mighty oaths.

The giant got to work. By night the stallion hauled enormous loads of stone, by day the giant laid them up. The wall rose, course upon course. With three days left of winter, it was nearly done.

“Whose idea was it to spoil the sky by giving away the sun and the moon—not to mention marrying Freyja into Giantland?” the gods shouted. They wanted out of their bargain. “It’s all Loki’s fault,” they agreed. “He’d better fix it.”

Loki transformed himself into a mare in heat. That evening, when the mason drove his stallion to the quarry, his horse was uncontrollable. It broke the traces and ran after the mare. The giant chased after them all night and, needless to say, he got no work done.

Nor could he finish the wall the next day with no stone. His always-edgy temper snapped. He flew into a giant rage.

The gods’ oaths were forgotten. Thor raised his terrible hammer and smashed the giant’s skull.

Eleven months later, Loki had a foal. It was grey and had eight legs. It grew up to be the best horse among gods and men.

In my next post, I’ll look at how Odin gave men poetry. 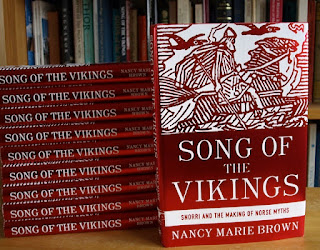 This essay was adapted from my biography of Snorri Sturluson, Song of the Vikings: Snorri and the Making of Norse Myths, published by Palgrave Macmillan. It originally appeared on the science fiction and fantasy lovers website Tor.com."The Grey God" is by Michael L. Peters; see more of his art at http://mlpeters.com.