In late July, with the help of America2Iceland--and you, if you're game--I'm going to recreate my favorite scene from my first book, A Good Horse Has No Color: Searching Iceland for the Perfect Horse.

Be prepared to ride fast and far, to get tired and probably wet, and to have an adventure you'll never forget riding on the silvery sands beneath the great glacier Snæfellsjökull, or "Snow Mountain Glacier," on Iceland's west coast.

The year before I bought my horses, I spent the summer in an abandoned house on the edge of the Longufjörur, or Long Beaches trail, a 40-mile riding trail uncovered only at low tide. The route, along the south side of Snæfellsnes, has been in use since the Saga Age. It cuts the mouths of several rivers, some of them deep-channeled salmon streams, others edged with quicksand. The safe paths shift from storm to storm, while the force of the wind and its direction, and the fullness of the moon, decide how fast a rider must cross.

"It's a dangerous path," my neighbor, Haukur of Snorrastaðir, told me, "if you don’t know the tides." But one memorable day he lent me two of his best "family" horses, Elfa and Dögun, and let me go with him and the group of riders he was leading over the sands. 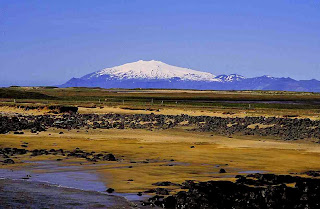 At last the tide was low, I wrote in A Good Horse Has No Color:

We opened the paddock gate and let the swirl of color resolve itself into free-running horses. First after them went Haukur on Bjartur, the cream-colored gelding he always rode. His hand horse, a black, he led at his knee, and I did my best to mimic him, riding Elfa and ponying Dögun, though I kept losing my right stirrup: with her every step Dögun banged into my heel.

We rode from the farm beside the River Kaldá on a path so deep our feet brushed the rim of the ruts and grass swished against our boot tops. The ponying got easier when the deep path emptied out onto a black-pebbled beach. I relaxed, took great drafts of the salty air, and settled in to enjoy the ride. This was living, Haukur said. This was Iceland. 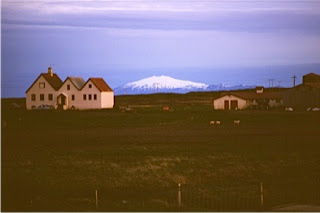 We crossed over mudflats pocked with airholes and headed for several grass-topped islands abandoned by the tide like a pod of stranded whales. A sea eagle lifted off one of the islands as we approached and scolded us with a high-pitched cackle. Geese flew over, banking, startled. We rode north onto the sandbar, across some grassy flats, back out through the sucky mud to the hard wet sand, whose color ranged from black to coffee-colored to tawny to gold.

We rested the horses on a grassy hillside out of sight of a nearby farmhouse. The buzz had been growing in our ears for some time before any of the riders registered what it was (some of us were half asleep with our hats over our eyes). A plane was coming in low. It zoomed over our hillside, making us sit up and snatch at the nearest bridles. A little red and white two-seater, the craft rose and banked steeply over the sea, then turned its nose toward us and dove again. Again it turned, and now it sparked Haukur's ire. He waved his cap and hollered at it. 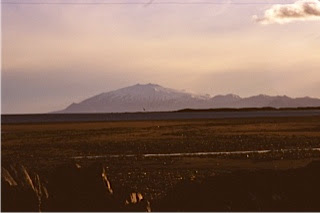 The other riders had mounted their horses and were circling around the spares. Again the plane passed low over us, then dipped even lower until it was skimming the mudflats. Haukur's holler suddenly turned concerned. The pilot would crash, would kill himself if he tried to land in that soft mud. Haukur thrashed his hat in the air again and began riding toward the beach. The plane lifted slightly, sailed across a wide tidal stream, and came down at last on the sandbar a quarter-mile offshore.

Haukur shook his head. There must be something wrong, he said. The pilot must be out of gas. There was no way off that sandbar, and the tide was rising. He turned and looked over his riders, all quite experienced except for me. We'll have to rescue him, he said. We'll have to swim.

Down he rode toward the stream and, without hesitating, urged his two horses in. The water rose above his thighs. The horses lifted their heads and bared their teeth, all but their heads and necks underwater. The loose horses and the other riders followed, but my hand horse balked and Elfa skittered farther down the shore before I could steer her in—with the result that she missed the sloping bank and was instantly swimming. 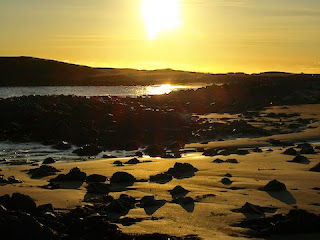 My boots filled up. The current pressed hard against my right leg and tugged away at my left. I lost my stirrups. The spare horse I was ponying began swimming with the stream, dragging her rein around behind my back. Elfa began turning seaward as well, her swimming a strange rolling motion. I began to panic.

Rationally I knew that what we were doing was quite ordinary. Horses have long been called "the bridges of Iceland," and Icelanders still will not go out of their way to stay dry crossing a bit of a brook. The English painter Samuel Waller wrote of a day in 1874 when he crossed 40 streams. He warned, "The great thing to beware of is looking at the water. You lose your head at once if you do so, as the eddies swirl around you so rapidly." If you should become unseated, he advised, "strike out for the bank at once and leave the animals to take care of themselves. To be engulfed with a horse in the water is a very complicated piece of business." 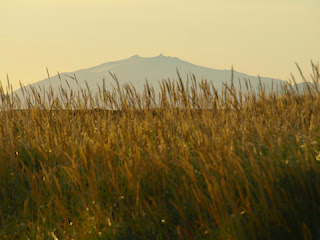 And I had two horses. It occurred to me suddenly that I was not "used to horses" at all.

I quickly took inventory and concluded I was hardly a rider. Rather than standing "firm in the stirrups," as Waller suggested, I had no stirrups. My hand horse was tipping my balance awry with her rein tight behind my back. Determined at all costs to stay on, I had cocked my feet up to lessen the drag on my water-filled boots and was clenching my knees, my hands in a death-grip on the reins.

In spite of all this, Elfa was swimming steadily, her ears back, but otherwise not noticeably upset that we weren't gaining the shore. Suddenly I knew what to do. Keeping firm hold of my hand horse, I dropped Elfa's rein, grabbed onto her mane, and relaxed. Immediately, as if I'd called out in a language we both understood, Elfa's head swung toward shore. My hand horse fell behind and swam nicely along after us. Soon we had sand under our hooves. Elfa kicked up and we came splashing out onto the beach in a fine smooth tolt. We charged over to where the other horses waited and I gratefully slid off. 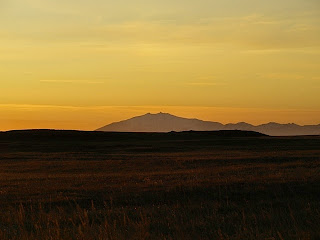 My first thought was to empty out my boots. Someone handed me a beer. I chugged it down, standing on one foot, holding two fidgeting wet horses and a boot full of water. Slowly I made out the tale. The pilot was the boyfriend of one of our riders and had flown out to treat her to a cold drink.

Hardly had the absurdity of the situation sunk in when I realized the riders were remounting. The plane's engine was being revved up. Someone grabbed my empty bottle and I was up and off, Elfa stretching out behind Haukur's Bjartur in the incredible gait called the flying pace—fast enough that my hand horse had to gallop to keep up, yet still Bjartur outdistanced us. We eased back into a canter and let the loose horses catch us, while our little beer-plane scooted by overhead, waggled its wings, and disappeared….

Never would I have imagined that, 17 years later, I would be leading riding tours in Iceland myself. But in 2013 I started doing so for America2Iceland, which is owned in part by the riding instructor and horse trainer Guðmar Pétursson and based at his farm of Staðarhús in the west of Iceland.

In 2015 Guðmar and I will be recreating the beach ride I wrote about in A Good Horse Has No Color, riding on the sands beneath the great glacier Snæfellsjökull on the America2Iceland Trekking Bootcamp Tour, July 27 to August 2.

There’s only room for 12 riders, so sign up soon if you want to come with me. Look here for more information:

http://america2iceland.com/trips/riding-bootcamp-level-1/
Note that I cannot guarantee there will be a plane to deliver beer to us on the sands, as there was in the book. But I can guarantee a memorable ride.


(Don't ride? Then take a look at my other America2Iceland tour, "Song of the Vikings," here: http://america2iceland.com/trips/song-of-the-vikings/)
Posted by Nancy Marie Brown at 10:56 AM

I live in northern Vermont with my husband, the writer Charles Fergus, a small herd of Icelandic horses and one Icelandic sheepdog. I offer tours to Iceland through the company America2Iceland.